Tag Archives: growing up with grandma

There is a saying in Malayalam which goes something like this….”You can keep a betel-nut in your lap , but not a palm tree”. Well, I’m not that tall yet, but my Ummamma is getting the drift of that adage these days, if you know what I mean.. The only time I deign to sit on her lap is when she reads me stories and shows me those colourful pictures from books. Thanks to Ummamma’s friend Madhavi Aunty , I’ve got a new collection of books published by the Childrens’ Book Trust , all the way from Delhi. Thank you Uncle Venkitesh for carrying them to Kannur. Much, much appreciated.

I’m having a blast.Sometimes I have to fight sleep , so as not to miss out on each precious moment. Ummamma doesn’t understand that and she keeps rocking me in her arms, sometimes for a pretty long time just so that she can lay me down on the bed and have her break. And then, many times, I wake up again just as my head touches the bed. She is pretty patient, but I make out from her sigh that she can’t keep pace with my exuberance. 🙂

Occasionally I give her a real scare…like when I was fidgeting around with this small plastic casio kind of toy which played different tunes when you pressed each key and managed to prise it open at the back and extract the small button like cells. Before she had noticed ( Ah! I am quite a fast one),I had one of them in my mouth. She had literally to fight with my jaw- bones to get my mouth open and take it out. Every other woman in the neighbourhood, has some tale to narrate, of some little one , who had either swallowed naphthalene balls or got fingers stuck in the door that they had tried to bang shut or some such misadventure. It freaks her out , I think. Hopefully, I’ll be more smart.

I am smart that way,believe me. I’ve mastered this gesture of bending my head to one side and smiling at my parents and Ummamma with that angelic smile we babies have, when I’ve done something to piss them off.And it works like magic every time. 🙂

We celebrated my uncle’s birthday a few days ago. Nice it was…cake and all. The guy is kind of strange though. He’ll take me along the lane till the turn to the main road, in the mornings ,when he leaves for work and walk me around when he gets back and all, but he just cannot understand anything I try to tell him. True it all still comes out as Ba..Ba….., but Ummamma and my parents catch on quite quick. This guy just looks at me and smiles and when my decibels increase, Ummamma has to come as the interpreter and explain . Very frustrating, I must tell you. Yea, I know he is not very talkative..but here I am just beginning to learn to communicate and he won’t even nudge me along. I’m told that we share a common trait though…that of tearing bits of the page of the books we are reading and nibbling at it. Me….I’m a little one…. He was in the 4thor 5th standard apparently when this habit took hold of him. Ummamma has now stopped leaving her books around within my reach, even that book which had a picture of a bearded bespectacled guy. I loved staring at that picture on the cover and the one on the first page inside….Chekhov something ..she keeps telling me. I’m missing him. Oh well,,,I’ll make do with my own set for now. 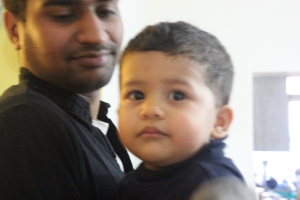 What else?…Yes… I can make sounds like the dog barking, the cat mewing, the snake hissing and of course that which comes easiest to me…Baa.Baa 🙂 You see this grandmother of mine has nothing else to do the whole day long and she keeps talking to me and telling me stuff. And it’s kind of cool …learning new things….specially about animals. There’s this series on the you-Tube ..Baby Einstein…very nice,with puppets introducing the real animals. I can watch that any number of times and not get tired. And the Vinci songs. Really cute 🙂 Some of those songs makes me want to dance along. Pity is, I can only shake my body as of now. Still too unsteady on my feet, but stay tuned. Soon I’m going to be making all the right moves.

Ah ..that reminds me. I did falteringly take two steps forward, the other day. As luck would have it, Mama and Papa had just come to pick me up. Mama was so thrilled that she didn’t miss out on that while she was away at work. Says now I can take my own time going about it . Can’t be long now before I’ll stop being so down to earth.

So how’s it been with you all? I do get to see you all everyday because before Ummamma goes to the You-Tube for my songs and videos, she quickly browses through her Facebook wall. And I love seeing my own photos and the videos she posts. Yes…I am a bit of a narcissist . Be honest, you guys…who isn’t?

Will catch up with you again soon with more exciting news . Bye till then 🙂

Tags: Cognitive skills in a one year old, growing up with grandma