We were fortunate that we were travelling through Bhutan in October, when the weather was clear and bright. Dochula Pass, about an hour’s drive from Thimphu , on the way to Punakha, is best visited at this time. Then, you are able to see the majestic Himalayan ranges all around, the snow capped peaks adding to the allure .

Here, on a green hillock, 108 stupas have been erected in memory of the Bhutanese soldiers who had fought against the Assamese rebels who had built a base there to direct their insurgency against India. Queen Ashi Dorji had commissioned it.

I should have stood in one place and wielded the camera , instead of trying to capture the scene while walking .Even so, I guess you may be able to get an idea of the ambience of this beautiful spot in the following two videos

There is also a beautiful temple called the Druk Wangyal Lhakhang Temple at the Dochula Pass , which has been built in honour of the fourth Druk Gyalpo (head of Bhutan), Jigme Singme  Wangchuk. 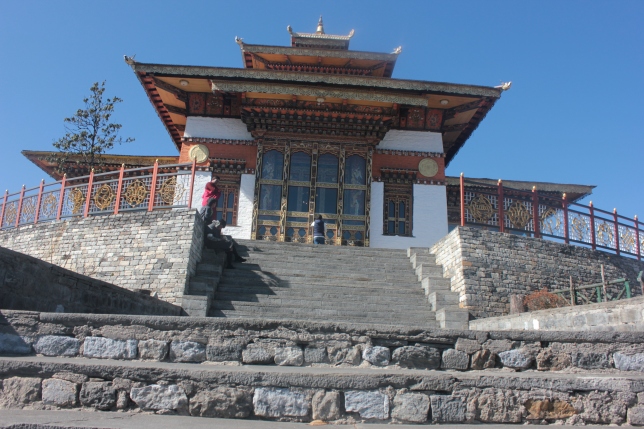 In December, the annual Druk Wangyal Lhakhang Festival is held in the open environs of this place and they say that if travelling to Bhutan  during that time , this event should not be missed , for it would envelop the art and culture of Bhutan during those days for the benefit of those who participate.

Later, we  sat in the nice cosy cafeteria, after going around and slouching on the sun-bathed grass of the hillock, drinking tea and eating fresh cream rolls, while soaking in yet again the panoramic view of the mountains and the cypress trees on the slopes, through the glass windows. Flags were festooned all over , fluttering in the breeze. They were blue (sky),white(clouds), red(fire) green(Water) and yellow(earth)in colour depicting the elements. 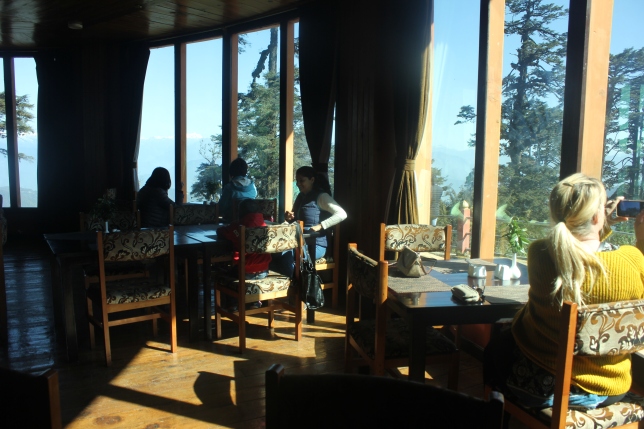 Flags were festooned all over , fluttering in the breeze. They were blue (sky),white(clouds), red(fire) green(Water) and yellow(earth)in colour depicting the elements. Buddhist mantras were inscribed on them and they are believed to bring in good fortune.

And here’s a video clip of our drive back from the Dochula Pass.

Posted by dreamingthruthetwilight on November 30, 2018 in Travel

This site uses Akismet to reduce spam. Learn how your comment data is processed.